Dan graduated in 2008 with a BA (Hons) Professional Musicianship, since then he has been constantly in demand for his versatility and dashing good looks.

Dan can also be heard playing double bass on the “Stella Artois” adverts and throughout Sky 1’s hit comedy “Spy”! 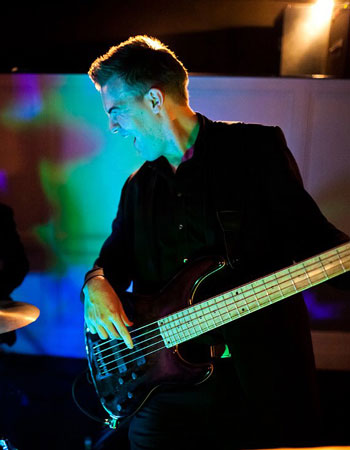 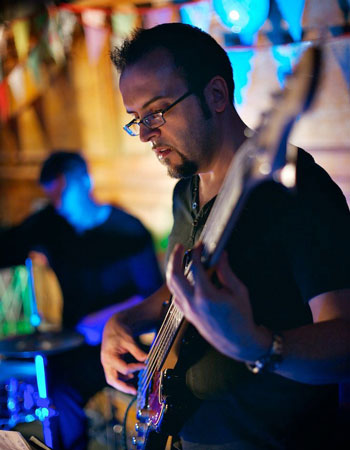 Since moving to Brighton in 2003 and immersing himself in the music scene, Dan has played many styles of music from Salsa to Metal. He has performed at all of Brighton’s music venues with a variety of different artists and has also worked and toured the UK extensively with world music ceilidh band Boka Halat.

Along with gaining a BA (Hons) in Jazz (2009) Dan is currently a tutor at the Academy of Music and Sound where he teaches contemporary bass guitar and music theory.

Simon was playing music from a very young age, starting with the piano at 2 and later moving on to brass instruments at 8 years old, playing trumpet and trombone in his local Scout band. He started playing guitar at 16, studying classically for a year and then taking private lessons with composer and session musician Steve Dodds (Mica Paris), before completing the Rock Metal and Intermediate guitar courses at the Guitar Institute in London.

In his early 20’s Simon moved to Boston for 2 years to study at the famous Berklee College of Music, on the Performance Studies course. Graduating with the Berklee Certificate, having made the Dean’s list for Excellence every semester.

On moving back to the UK Simon quickly became a popular musician working in and around London & Brighton with rock bands, the jazz-funk improvisational group the ‘Kings Cross Project’, forming the jazz-funk band ‘Mobius’ with Otto Williams (ray Charles, Chaka Khan, Amy Winehouse) and the jazz duo ‘Indigo’ which quickly grew into one of the most popular duos on the south coast, performing regularly, making numerous appearances on BBC Southern Counties Radio and recording the album “Old, New, Borrowed and Blue”.

In recent years Simon has been performing more regularly on the Bass, finding a particularly love for the groove and the sound of the instrument. Simon can regularly be heard with ‘The John Lake Trio’, ‘Big Als Jamboree’ & ‘Treatment of Choice’ as well as ‘Licence to Ceilidh’! 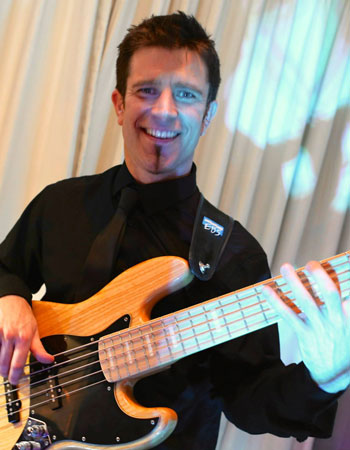